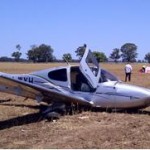 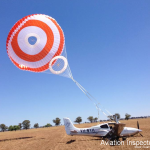 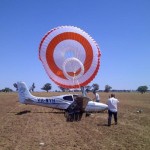 A lucky escape for 2 guys flying from Emerald on 21st October 2012 when their Cirrus SR22 engine seized at approx 5000ft, pilot selected glide attitide but knew he would not make it too Gilgandra.
He selected to release the Balistic recovery chute at 2000ft.
Both men ended with minor injuries, both taken to Dubbo Base for treatment!

GOOD training and state-of-the-art equipment saved the lives of two Dubbo men who walked away from a light plane crash near Gilgandra.

Pilot John Nixon and passenger Tom Warren were standing next to the wreckage of a Cirrus SR22-G3 single-engine, four-seater aircraft when rescue responders arrived on the scene at Leeches Creek Road, 10km south of Gilgandra, about 2.30pm on Wednesday.

“I think they were expecting to find serious injuries.”

The Cirrus aircraft – owned by a friend of Mr Nixon – is fitted with a rocket-propelled emergency parachute system capable of lowering the entire aircraft and its occupants to the ground.

The Australian Transport Safety Bureau yesterday reported the accident was the first successful emergency parachute deployment by a Cirrus aircraft in Australia.

Mr Nixon, a 41-year-old businessman, had not anticipated any problems as he made preparations to fly from Queensland to Dubbo. He briefed his 28-year-old passenger about the emergency features of the aircraft in accordance with normal procedures.

“Everything was fine and we were enjoying the day,” Mr Nixon said.

As he looked down at the Gilgandra district from about 5000 feet, the aircraft suddenly lost oil pressure and the engine seized.

“I set the plane to glide into Gilgandra airport but quickly realised we weren’t going to make it,” Mr Nixon said.

“Tom and I were both looking for dirt airstrips on properties but we couldn’t find any.

“I informed air traffic control about the emergency situation, turned the plane away from traffic on the Newell Highway and headed into a big open paddock.

“I own a plane exactly the same as the one I was flying and knew all about the ballistic parachute safety system.

“Not many people in the world have set off an aircraft emergency parachute but I had attended a training course at Wagga about 18 months ago and knew exactly what to do.” Mr Nixon said he and Mr Warren didn’t have time to feel frightened or panic.

“We were on the ground less than a minute after the oil gauge indicated the problem,” he said.

“Adrenalin kicked in and I automatically did what was needed.”

Mr Nixon knew there was a risk the aircraft could drift and waited until 2000 feet before deploying the parachute.

“I needed to make quick decisions,” he said.

“The chute went off like a missile out the back of the aircraft and made a hell of a noise. We came to an almighty stop and the plane went into a nose down attitude as the parachute inflated.

“About six seconds later the line cutters (small explosive devices) at the back of plane went off, levelling the aircraft.

“The ground was approaching pretty quickly but I was calm and Tom was calm. He was a good passenger and did everything he was supposed to do.

“The plane hit the ground on its wheels. The undercarriage collapsed to take the impact of the crash, just as it is supposed to do.

“The aircraft seats are especially designed to take the force of a crash so the occupants don’t break their backs.

“The seats and the emergency airbag system gave us good protection. Everything worked like a charm.”

When the plane was on the ground both men jumped out through the passenger door and moved away from the aircraft in case it caught fire.

“We stood back for a couple of minutes to make sure we were both OK before assessing the scene,” Mr Nixon said.

“I went back into the aircraft to get my mobile phone and contacted air traffic control. They were pleased to hear we were OK.”

Asked if he felt lucky, Mr Nixon’s response was matter-of-fact:

“The Cirrus is a bloody good aircraft and everything went to plan. An emergency happened and I dealt with it.”

“I have had good training and won’t be worried about getting in my plane and going for a fly.”

Yesterday Mr Nixon and Mr Warren travelled back to the accident scene to check the aircraft.

Mr Nixon has a black eye and a bruise on his chin, caused when his knee flew up during the impact. Mr Warren has no injuries.