My Flying Videos Approach to

Some of you might know I’ve been learning to fly aircraft for last 2 years! I started in April of 2010 at Central West Flying from Bathurst, they were a newly formed company (2009 ) with Jabiru aircraft as their main Ab Initio training aircraft. I learnt in a Jabiru 160, a 4 cyl 80 hp engine, doing solo in approx 20 hours. After much more flying in this plane until my RAA Pilot Cert in Nov that year, I could then fly 25 nm from Bathurst aerodrome. Many months later, completed my Nav Endorsement in the Larger J230D,   I can now fly anywhere in Australia, except Controlled airports, eg Sydney, Canberra, Melbourne. 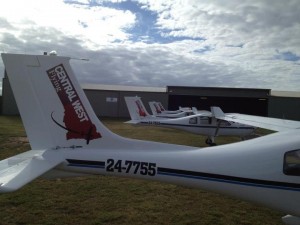 I have recently obtained my Student Licence with General Aviation ( GA) , solo in a Cessna 172, still much more study and flying prior to obtainging my full license. Due to many flying vids out on Youtube, thought would buy couple of cameras, first being Go Pro HD, fantastic little camera – http://gopro.com/ .  The second, being that i wanted to record Cockpit audio as im flying, so i found the Contour Nightflight Gps + , which has an audio connector, plugs directly into audio on dash of aircraft and also headset!  Amazing little HD camera also.   http://contour.com/products  check them out! Without further ado, will share some of my flying videos made during the last couple of years!

The most recent was a trip to Temora Natfly in April 2012, a very busy trip , gaining much experience also! Hear the audio between all other aircraft also inbound to Temora! My callsign is Jabiru 7525.