A terrible disaster occurred on 11th March 2011 in Japans earthquake a 8.8 Magnitude struck.  The epicentre was reported to be 130 km of the east coast of Oshika Penisula, with the hypocentre of 32 km. 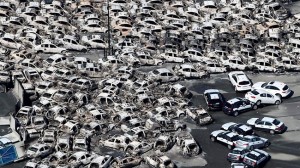 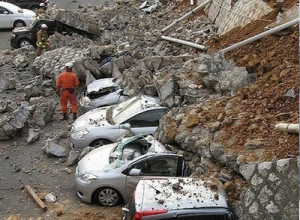 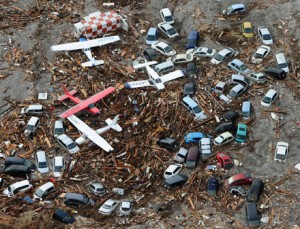 Around 4.4 million houses have been affected with power failures, explosions at the Fukushima I Nuclear Power Plant .

The 2011 earthquake off the Pacific coast of Tōhoku as the 2011 Tohoku earthquake,[9] the Great East Japan Earthquake,[10][11][fn 1] and the 3.11 Earthquake, was a magnitude 9.03 (Mw) undersea megathrust earthquake off the coast of Japan that occurred at 14:46 JST (05:46 UTC) on 11 March 2011, with the epicentre approximately 70 kilometres (43 mi) east of the Oshika Peninsula of Tōhoku and the hypocenter at an underwater depth of approximately 32 km (20 mi).  It was the most powerful known earthquake ever to have hit Japan, and one of the five most powerful earthquakes in the world since modern record-keeping began in 1900. The earthquake triggered powerful tsunami waves that reached heights of up to 40.5 metres (133 ft) in Miyako in Tōhoku’s Iwate Prefecture, and which, in the Sendai area, travelled up to 10 km (6 mi) inland. The earthquake moved Honshu (the main island of Japan) 2.4 m (8 ft) east and shifted the Earth on its axis by estimates of between 10 cm (4 in) and 25 cm (10 in) .

On 12 September 2012, a Japanese National Police Agency report confirmed 15,880 deaths , 6,135 injured, and 2,694 people missing across twenty prefectures, as well as 129,225 buildings totally collapsed, with a further 254,204 buildings ‘half collapsed’, and another 691,766 buildings partially damaged.  The earthquake and tsunami also caused extensive and severe structural damage in north-eastern Japan, including heavy damage to roads and railways as well as fires in many areas, and a dam collapse. Japanese Prime Minister Naoto Kan said, “In the 65 years after the end of World War II, this is the toughest and the most difficult crisis for Japan.” Around 4.4 million households in northeastern Japan were left without electricity and 1.5 million without water.

The 9.0 magnitude (MW) undersea megathrust earthquake occurred on 11 March 2011 at 14:46 JST (05:46 UTC) in the north-western Pacific Ocean at a relatively shallow depth of 32 km (19.9 mi) with its epicenter approximately 72 km (45 mi) east of the Oshika Peninsula of Tōhoku, Japan, lasting approximately six minutes. The earthquake was initially reported as 7.9 MW by the USGS before it was quickly upgraded to 8.8 MW, then to 8.9 MW, and then finally to 9.0 MW. Sendai was the nearest major city to the earthquake, 130 km (81 mi) from the epicenter; the earthquake occurred 373 km (232 mi) from Tokyo.

The main earthquake was preceded by a number of large foreshocks, with hundreds of aftershocks reported. The first major foreshock was a 7.2 MW event on 9 March, approximately 40 km (25 mi) from the epicenter of the 11 March earthquake, with another three on the same day in excess of 6.0 MW. Following the main earthquake on 11 March, a 7.0 MW aftershock was reported at 15:06 JST (6:06 UTC), succeeded by a 7.4 MW at 15:15 JST (6:16 UTC) and a 7.2 MW at 15:26 JST (6:26 UTC). Over eight hundred aftershocks of magnitude 4.5 MW or greater have occurred since the initial quake. Aftershocks follow Omori’s Law, which states that the rate of aftershocks declines with the reciprocal of the time since the main quake. The aftershocks will thus taper off in time, but could continue for years.

One minute before the earthquake was felt in Tokyo, the Earthquake Early Warning system, which includes more than 1,000 seismometers in Japan, sent out warnings of impending strong shaking to millions. It is believed that the early warning by the Japan Meteorological Agency (JMA) saved many lives. The warning for the general public was delivered about 8 seconds after the first P wave was detected, or about 31 seconds after the earthquake occurred. However, the estimated intensities were smaller than the actual ones in some places in Kanto and Tohoku regions. This was thought to be because of smaller estimated earthquake magnitude, smaller estimated fault plane, shorter estimated fault length, not having considered the shape of the fault, etc. There were also cases where large differences between estimated intensities by the Earthquake Early Warning system and the actual intensities occurred in the aftershocks and triggered earthquakes.